If you want to know about the properties of elements then you should read the periodic table. If you want to know about the solvency of a company then you should look at its balance sheet. What if we want to learn about our own irrationality? Without any doubt I would read Munger’s psychology of human misjudgment. I came across this gem three years back. Every time I read this, I learn something new about my irrationality. Guy Spier is a Zurich based investor and author of a book entitled The Education of a Value Investor. In a recent interview he told about the value he got out of Munger’s psychology of human misjudgment.

For 18 months, Mr. Spier listened to nothing in his car but a lecture on human misjudgment by Charles Munger, Mr. Buffett’s vice chairman at Berkshire Hathaway. Of the two dozen mental mistakes cited by Mr. Munger, “I realized I was guilty of all of them,” No wonder he has sought, as he says in his book, “to banish the false assumption that I am truly capable of rational thought.” Once he accepted “just how flawed my brain really is,” he writes, “I could design an array of practical work­ arounds based on my awareness of the minefield within my mind.” To escape what he calls “the New York vortex” of bad influences such as envy, greed and hyperactive trading, Mr. Spier moved his fund to Zurich in 2008.

It’s very important to use Munger’s teachings on a daily basis. Knowledge without application is useless; use-it-or-lose-it. To use it on a daily basis we need to make it second nature. There are 24 standard causes of human misjudgment. How do we remember all of them? Is there a better way? Few days back I read about a technique called as mind mapping. Using this technique we can organize information visually so that we can recall them easily when needed.

A mind map is a diagram used to visually organize information. A mind map is often created around a single concept, drawn as an image in the center of a blank landscape page, to which associated representations of ideas such as images, words and parts of words are added. Major ideas are connected directly to the central concept, and other ideas branch out from those. Mind maps can be drawn by hand, either as “rough notes” during a lecture, meeting or planning session, for example, or as higher quality pictures when more time is available. – Wikipedia 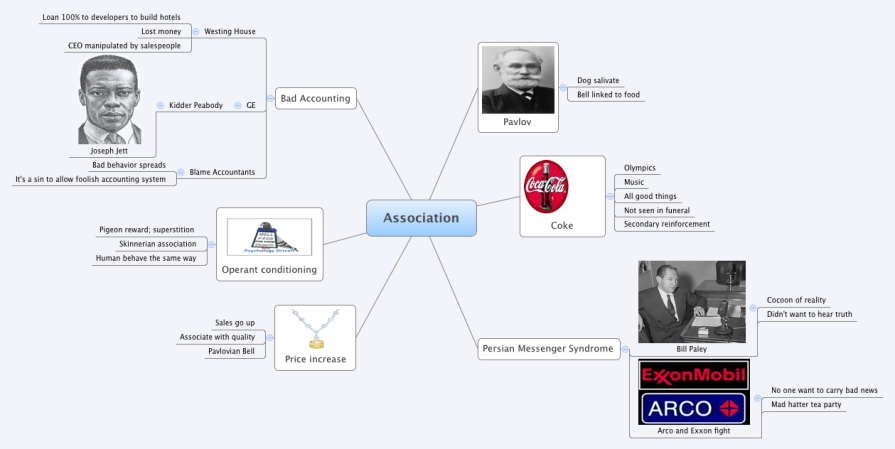