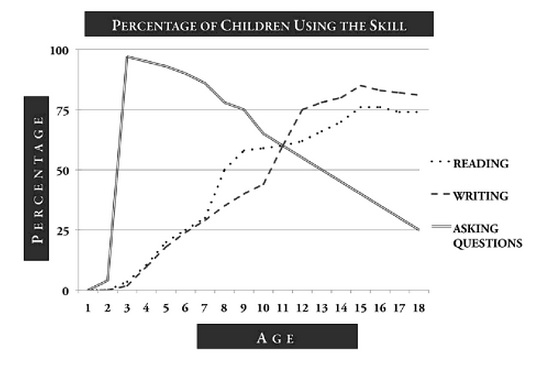 Why do we stop questioning?

In order to question we need to think. This requires some mental workload. Our brain tries to find ways to reduce this workload. One way to reduce the workload is to not question and accept everything around us and operate in an autopilot mode. Psychologist Daniel Kahneman refers to this as System1 thinking.

In order to question we need to accept our ignorance. But our society punishes ignorance by labeling the ignorant as an idiot. Since the incentives are not aligned we stop asking questions.

In order to question we need to remain curious. Fear is the enemy of curiosity. In schools most kids see teachers as authority figures and this fear prevents them from asking questions. When we grow up we continue this behavior by following the instructions from the higher ups blindly.

Questions are valuable than answers

Someone asked Albert Einstein for his phone number. Einstein looked up for his own number in the phone book. When asked why a genius like him cannot remember his own number, he replied – there’s no reason to fill his mind with information that can easily be looked up. This is very true In the current era of Google and Watson.

I wanted to know the price of IBM stock. I did a google search by typing IBM and it already figured out what I was looking for and it autofilled IBM stock in the results.

In 2011 IBM Watson made its appearance on the TV quiz show named Jeopardy. It proved to the world that it can answer questions better than any human. It is a treat to see Watson playing against the humans.

As the world becomes more complex and dynamic knowledge is becoming a commodity. Answers are available everywhere. We cannot compete with technology in storing answers. But when it comes to questioning we have the edge. Computers does not know how to ask questions. We humans have curiosity, creativity, divergent thinking skills, imagination, and judgement. To use this effectively we need to ask questions. If we think of questions and answers as stocks, the value of questions are going up and answers are coming down.

Given below are simple questions asked by normal people like you and me which resulted in creating huge impacts.

Marc Benioff, an executive at the tech company Oracle once asked – “Why aren’t all enterprise software applications built like Amazon and eBay?” – The result is salesforce.com. As of today its market capitalization is $35 billion.

Tim Westergren, a musician once asked – “What if a radio station could know what songs you would like before you knew?” – The result is Pandora. It plays music according the tastes of each member.

Nanda, a design student at MIT once asked – “What if it was harder to turn off the alarm clock? What if your alarm clock forced you to get out of bed and chase after it?” – The result is clocky. Unlike other clocks that you can easily hit the snooze button and fall back asleep, the Clocky Alarm Clock makes sure you get out of bed.

A beautiful question is an ambitious yet actionable question that can begin to shift the way we perceive or think about something – and that might serve as a catalyst to bring about change.

Just coming up with questions without taking any action will not produce any change. Questions + Actions = Innovation. On the other hand Questions – Actions = Philosophy. In order to ask questions that produces change he proposes a framework called as Why-What If-How.

Let us apply this Why-What If-How framework to a real example.

At the age of 13, Jack Andraka lost his uncle due to pancreatic cancer. Upon researching in the internet he found out over 85% of pancreatic cancer are detected at the late stage. He also found out that the technique used for detection is (1) Over 60 years old (2) Expensive and it costs around $800 (3) Not reliable and misses 30% of the times. This made him to ask the why question – Why isn’t there a fast, inexpensive test for pancreatic cancer?

He started learning about cancer from his two friends – Google and Wikipedia. From this he learned that cancer patients have high level of a protein called mesothelin. He was thinking about ways to detect this protein. His breakthrough came in high school biology class. He was reading about carbon nanotubes which change electrical properties when combined with antibodies and mesothelin. This made him to ask the what if question – What if I exposed a single-wall carbon nanotube with an antibody to a protein overexposed in pancreatic cancer?

He emailed his idea to 200 medical professors and 199 of them rejected. A professor named Anirban Maitra thought this idea might work and he opened up his lab for Andraka and helped him to move to the how stage. After failing several times he finally solved the puzzle. His solution was a paper sensor which (1) Costs 3 cents (2) Just 5 minutes to run (3) Extremely reliable.

This innovation earned him an international science fair award and an invitation to be a special guest at President Obama’s 2013 State of the Union address. Watch the TED presentation given by Andraka. It is simply the best.

Charlie Munger tells that if you want to get smart you need to ask why. Sakichi Toyoda, the founder of Toyota Industries invented five whys methodology. In this method one should ask why five times in succession as a means of getting to the root of the problem. Here is an example from the book

When, for example, a faulty car part came out of a factory, asking why the first time would yield the most obvious answer – say, that someone on the assembly line had made a mistake. By then asking why that mistake occurred, an underlying cause might surface – such as insufficient training on a task. Asking why again, the company might discover the training program was underfunded; and asking why about that could lead back to fundamental company priorities about where money should be spend and what was most important in the end.

Questioning led Andraka to develop a way to detect cancer when he was just 15 years old. All of us have the capability to question. We are born with that skill. Unfortunately we lost that skill due to the fear of showing our ignorance. Take the initiative to making questioning a habit. A More Beautiful Question is an excellent read and I really enjoyed it.

3 thoughts on “A More Beautiful Question”