Around 42% of college students in America will never read another book after graduation. Compare these students with Todd Combs one of the money managers at Berkshire Hathaway. He spends most of his time reading and thinking. In one interview he said that he reads 500+ pages of annual reports every week.

What drives Todd Combs to read so much when many of us spend a lot time on unproductive things like watching television? The simple answer to this question is his habit. Our brain is an energy-guzzler. In order to conserve energy it makes repeated activites as second nature by rewiring itself in a certain way.This happens for both reading and watching television. These repeated activites are habits and they emerge because the brain is constantly looking for ways to save effort. Once habits are are formed they are encoded in our brain forever. This is the reason why we need to acquire right habits very early in life. 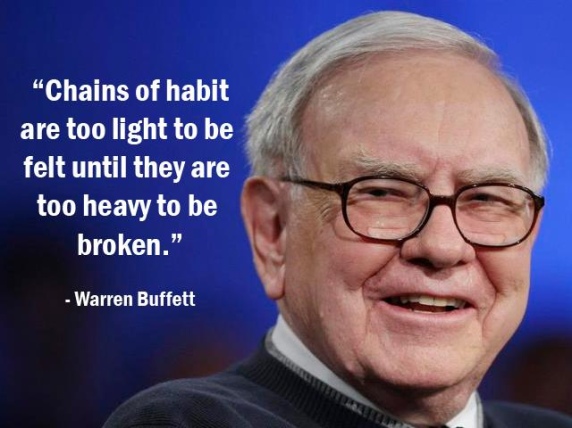 In the fantastic book The Power Of Habit author Charles Duhigg explains about the science of habit formation. He provides us with the tools using which we can program good habits within us. In this post I will be summarizing my learnings from this book.

Picture the human brain as an onion composed of layer upon layer of cells. Most of our complex thinking happens at the outermost layers of the brain. Without this you will not be able to comprehend this post. On the evolutionary timescale, the outermost layer got added very recently. As you go deep inside the brain towards the center of the skull, you will find a golf ball sized lump of tissue. This is called as basal ganglia where our habits are stored. 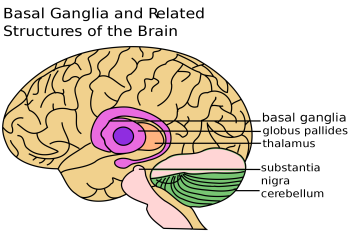 The maze was structured so that each rat was positioned behind a partition that opened when a loud click sounded. Initially, when a rat heard the click and saw the partition disappear, it would usually wander up and down the center aisle, sniffing in corners and scratching at walls. It appeared to smell the chocolate, but couldn’t figure out how to find it. When it reached the top of the T, it often turned to the right, away from the chocolate, and then wandered left, sometimes pausing for no obvious reason. Eventually, most animals discovered the reward. But there was no discernible pattern in their meanderings. It seemed as if each rat was taking a leisurely, unthinking stroll. The probes in the rats’ heads, however, told a different story. While each animal wandered through the maze, its brain—and in particular, its basal ganglia—worked furiously. Each time a rat sniffed the air or scratched a wall, its brain exploded with activity, as if analyzing each new scent, sight, and sound. The rat was processing information the entire time it meandered. — The Power Of Habit

The scientists repeated their experiments several times and monitored the brain activity of the rats. For the first few rounds each rat had a lot of activity in its brain. This is reflected clearly in the image on the left side. Now focus only on the image on the right hand side. Why did the rat’s brain spike upon hearing the click sound? As soon as it heard the click sound its brain recognized that it’s time to get the chocolate. This is why there is an initial spike. At this point its basal ganglia takes over the control and retrieves the information necessary to navigate the maze and get the chocolate. Any habits executed by the basal ganglia is less taxing on the brain and this is the reason why its brain activity is low. When the rat gets the chocolate it becomes happy which is reflected by another spike at the very end.

By navigating the maze over and over the rats formed a habit loop. There are three steps involved in the habit loop. You need a cue. For rats the click sound acted as a cue. This cue in turn makes the basal ganglia to execute the stored routine subconsciously. The routine for rats is to navigate the maze and get the chocolate. The final step is the reward which for rats is to eat the chocolate. This cue-routine-reward is the habit loop. This habit loop happens to be same for humans also. Consider the act of brushing our teeth. As soon as we wake up in the morning, the bad smell in our mouth acts as the cue. Without even thinking we execute the routine stored inside the basal ganglia and brush our teeth. The reward after brushing is clean teeth and fresh breath.

This process within our brains is a three-step loop. First, there is a cue, a trigger that tells your brain to go into automatic mode and which habit to use. Then there is the routine, which can be physical or mental or emotional . Finally, there is a reward, which helps your brain figure out if this particular loop is worth remembering for the future: Over time, this loop— cue, routine, reward; cue, routine, reward— becomes more and more automatic. — The Power Of Habit

Wolfram Schultz is a professor of neuroscience at the University of Cambridge. He conducted a novel experiment with a monkey named Julio. One day he positioned Julio in front of a computer monitor. Julio’s job was to touch a lever whenever color shaped objects appeared on the monitor. If Julio touched the lever when the shape appeared then it would be rewarded with a drop of blackberry juice. After repeating the same experiment several times the habit loop for Julio started to emerge. 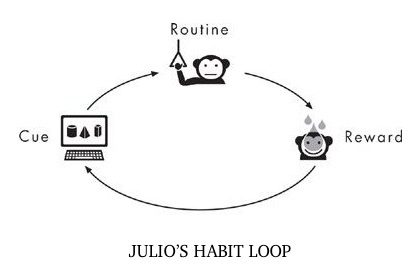 During the experiment Schultz was monitoring the brain activity of Julio. As the experiment progressed Schultz noticed something interesting. Take a look at the image on the left hand side. During the first few rounds the brain activity of Julio spiked when it received the blackberry juice. But as the experiment continued its brain activity started spiking when the cue appeared on the screen. The monkey started associating the cue with the reward. This is because of pavlovian association. As soon as the monkey saw the cue it started to crave for the reward. This craving is extremely powerful and it drives our habit loop.

This is how new habits are created: by putting together a cue, a routine, and a reward, and then cultivating a craving that drives the loop. Take, for instance, smoking. When a smoker sees a cue— say, a pack of Marlboros— her brain starts anticipating a hit of nicotine. Just the sight of cigarettes is enough for the brain to crave a nicotine rush . If it doesn’t arrive, the craving grows until the smoker reaches, unthinkingly, for a Marlboro. Or take email. When a computer chimes or a smartphone vibrates with a new message, the brain starts anticipating the momentary distraction that opening an email provides. That expectation, if unsatisfied, can build until a meeting is filled with antsy executives checking their buzzing BlackBerrys under the table, even if they know it’s probably only their latest fantasy football results. — The Power Of Habit

In his lab he setup one bowl of freshly baked cookies and another bowl of radishes. The participants were undergraduates and they were divided into two groups. Before the experiment both the groups were asked to skip a meal. One group was instructed to eat the cookies and ignore the radishes. The other group was asked to ignore the freshly baked cookies and eat only the radishes. The participants were told that the point of this experiment is to test their taste perceptions. But this was not true. The purpose of this experiment is to force one group of students (radish eaters) to exert their willpower.

The cookie eaters, with their unused reservoirs of self-discipline, started working on the puzzle. In general, they looked relaxed. One of them tried a straightforward approach, hit a roadblock, and then started again. And again. And again. Some worked for over half an hour before the researcher told them to stop. On average, the cookie eaters spent almost nineteen minutes apiece trying to solve the puzzle before they rang the bell.

The radish eaters, with their depleted willpower, acted completely different. They muttered as they worked. They got frustrated. One complained that the whole experiment was a waste of time. Some of them put their heads on the table and closed their eyes. One snapped at the researcher when she came back in. On average, the radish eaters worked for only about eight minutes, 60 percent less time than the cookie eaters, before quitting.

Willpower isn’t just a skill. It’s a muscle, like the muscles in your arms or legs, and it gets tired as it works harder, so there’s less power left over for other things. — The Power Of Habit

Applying The Power of Habit

So far we learnt about habit loops, craving, and willpower. Let us put this knowledge to use for developing a new habit. Which habit should we develop? The new year is just around the corner and one of the resolution which we will all have is to exercise regularly. Let us see how to develop the habit of exercising regularly.

Step 1: Before falling asleep you should create a list of tasks that you will be doing the next day. The first item in the list should be exercise. Why is this important? When we write things down we will most likely follow it because of our friend commitment-and-consistency. Exercising is hard work and our brain will try to avoid it. It is very important to do it early in the morning as our willpower tank will be full after a good night sleep. So odds of skipping it is very low. If you are a geek and looking for a time management software try timeful.

Step 2: Go to bed by wearing a gym pant. Also keep your running shoes in front of your bedroom. Why is this important? After waking up you will definitely notice your pants and running shoes which will act as your cues. After finishing the exercise reward yourself with something you like. It could be a smoothie or the endorphin high you get after the exercise. Continue doing this for several days and you will develop a habit loop.

Step 3: To make your habit loop powerful we need to crave like monkey Julio. The monkey craved for blackberry juice the moment it noticed the cue. Similarly when you look at your cues you need to crave for the reward you chose in Step 2.

If you want to start running each morning, it’s essential that you choose a simple cue (like always lacing up your sneakers before breakfast or leaving your running clothes next to your bed) and a clear reward (such as a midday treat, a sense of accomplishment from recording your miles, or the endorphin rush you get from a jog). But countless studies have shown that a cue and a reward, on their own, aren’t enough for a new habit to last. Only when your brain starts expecting the reward— craving the endorphins or sense of accomplishment—will it become automatic to lace up your jogging shoes each morning. The cue, in addition to triggering a routine , must also trigger a craving for the reward to come. — The Power Of Habit

Using my brain I have created a list of steps to trick my brain so that it can exercise regularly. Is this not a paradox? Will this trick work? Charlie Munger thinks that it will and so I believe that it will.

15 thoughts on “The Power of Habit”